Use the Over Bought Condition to Sell your Stocks

An over bought condition occurs when a stock price hits a high after a run up. It's a condition seen at the top of a naturally occurring wave of buying and selling that gives stock traders a good idea of when to get out of a stock position before the price goes back down. 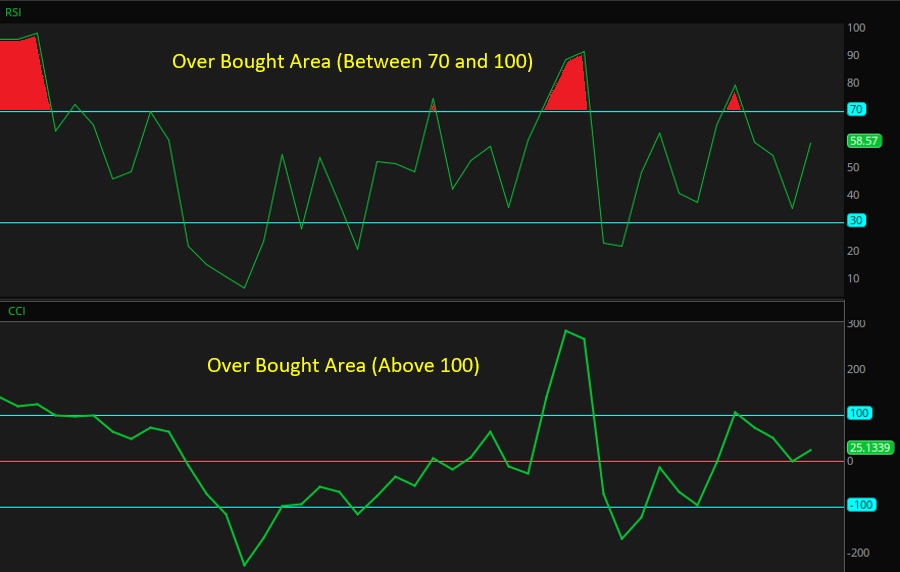 I have great indicators that I use on my charts that tell me when a stock price has breached the over bought mark. These indicators are a great way to let me know when I should get out of the trade before the stock price drops back down.

There are three key over bought/over sold indicators that when used together, are a good signal of buys and sells. In particular, for this condition, they signal when the price is getting too high to maintain an upward trend (it is getting too expensive for people to want to buy it).

Generally, when a stock price is getting too high, it will be in an overpriced condition that investors begin getting scared. They believe the price is losing steam and will start going down, which most times will happen. It is not typical that the price will keep going up unless there is some major outside influence pushing it up further such as a hot sector, hot market, or a bunch of hype in the news and social media.

The relative strength index (or RSI) is an oscillating indicator that calculates the speed and change of price movements of a stock. The RSI goes up and down between zero and 100.

Generally, an over bought condition exists once the indicator reads over 70. But a lot of stocks reach over 70 and become extremely overbought. This point (over 80) is usually a better time to sell. The higher the RSI, the more likely it is to drop down.

The commodity channel index (CCI) plots the current price over a given period of time relative to an average price level to measure the oscillating trend of the stock. It doesn't have a min or max level, but does go between a channel of 100 to -100.

Generally, an over bought condition exists when the CCI is over 100. Another great CCI indicator is to use the CCI Average indicator which shows two oscillating lines. When the CCI value crosses the average down while over 100, it is a signal that it is turning down.

The direction of movement indicator (DMI) Stochastic Extreme is an over bought/over sold indicator, utilizing the DMI highs and lows. It follows along with CCI and RSI, and backs up the condition exists to sell.

Generally, an over bought condition exists when the DMI value is above 90 in the indicator.

When the chart reaches multiple over bought signals, it is time to sell the security before the price drops. When the price does drop, it will eventually dip down into an over sold condition.